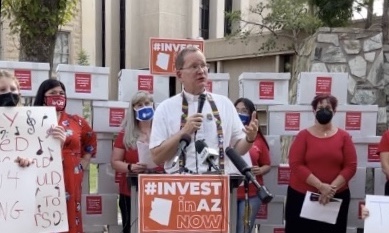 Arizona Interfaith Network and their education coalition partners have halted the lowest so-called “flat tax” ever enacted by a state.  By demanding a referendum on Senate Bill 1828, the coalition stopped the destructive reworking of Arizona’s tax code that would have reduced revenue by over $1 billion annually, putting future generations of Arizonans at risk. Instead the tax cut proposal will be referred to the 2022 ballot.

National anti-tax groups see Arizona’s tax legislation as a path to replicate, as evidenced by op-eds by the likes of Grover Norquist touting Arizona as a “national model”. This puts AIN’s fight into a larger context of citizens demanding responsible stewardship and preservation of state budgets that should be put to work for the good of their state, even in the face of well-funded outside interest groups.

The utter lack of political will to invest in future generations has got to stop.

"They’ve decided to radically restructure our tax code to reward the very wealthy on the backs of everyone else.  They did so on the narrowest of margins, and they thought we wouldn’t notice.  This is an affront to the voters of our state.  It’s an insult to our teachers, and it’s a direct attack on the very people that all of us, people of faith, are instructed to protect:  children, the vulnerable, those who live on the margins and who have suffered the most in this pandemic.”